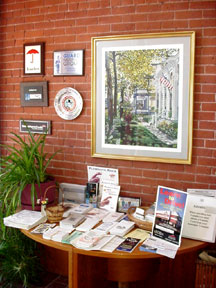 Over 127 years of insurance and financial service to the people of Franklin County and surrounding towns of Massachusetts!

A.H. Rist Insurance of Turners Falls, Massachusetts is proud to be celebrating over 127 years of service to tens of thousands of people and businesses in the region. Owner, Charles Donovan says “The personalized service, neighbor helping neighbor, has been the backbone of the business since it began”.

We wonder if the longevity of the locally owned firm, could have been imagined by founder Albert H. Rist, when he opened the agency’s doors in 1888. Mr. Rist began the business, then located at 55 4th Street, Turners Falls, Massachusetts when the main area of concern was smoke and fire insurance. Rist Insurance has continued to grow with the communities needs, and now writes a full range of policies from homowner to contractor insurance…to health and workers compensation insurance.

The need for more space prompted the Insurance Agency’s only move in 1984. The firm was relocated just around the corner to 159 Avenue A, after restorations were made to the former Rooney’s Shoe Store building. The buildings character and individuality were preserved in the restoration, and now provides a comfortable home, for the prominent locally owned business, as well as a downtown landmark. Chuck Donovan, on behalf of his entire staff of local professionals, extends a warm thanks, for the continued support of all his loyal clients. An open invitation stands to both new and present clients to call, visit or email the agency, where you are treated like family, not a number.